Home » Geografi » Distribution of flora and fauna in the world

Distribution of flora and fauna in the world

This time I will discuss material about the Distribution of Flora and Fauna. The following explanation about this: 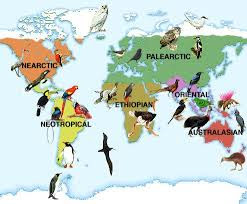 A. Distribution of flora and fauna in the world

Biom is an area that is controlled by climate and is dominated by certain flora and fauna. From this biom we will know more about the distribution of flora and fauna. Some of the biomes are described as follows.

Rain forest is a forest that is always green all year long (evergreen). The existence of this forest is very important for Earth-dwelling creatures. This forest functions to clean the air and replace it with oxygen. No wonder the forest is dubbed the lungs of the world. Because it is so important, this forest needs to be preserved as a world heritage.

As the name implies, of course you can guess that this forest exists in the tropics. The tropics are located between the northern turning line (23030'LS). Of course only the region located in this area has a tropical rain forest. The region includes parts of Asia, Africa and South America.

The trees in the tropical rain forest are very dense. The canopy is very tight so that it can block the sunlight from breaking through the forest floor. This causes the forest floor to become wet and moist.

The plants that live in this forest are almost countless. Starting from large tall trees towering up to epiphytic plants whose species number in the hundreds.

In this forest lives a variety of animals from mammals, reptiles, birds to innumerable types of insects. Although both live in tropical rain forests, the types of animals in Africa, Asia, and South America clearly show the difference.

As the name implies, this forest is located in temperate climates, between 23030 '- 66030' LU and LS. Unlike the tropical rain forest, plants that exist in the temperate rain forest are not much. Only plants that are resistant to cold climates that are able to grow in this forest are generally in the form of taiga, namely needle-leaf forests such as pine, fir, pine and balsam.

Most deciduous forests are also in temperate climates that have four seasons. It is called a deciduous forest because in the autumn the fall decays, this species includes chestnut, maple, sepang, and defender trees. Before the leaves fell, the leaves of these colorful trees were very beautiful. Some are yellow, orange, dark green, even bright red.

Animals that live in this forest include opossum (a type of rat), ground squirrels, snakes, falcon birds, and insects. Decay forests are found in North America, East Asia and Europe.

Deserts are the most arid place on earth. In Bio Mini, water is available in very limited quantities. However that does not mean in the desert there is no life. In this place lives a variety of flora and fauna, especially those that are resistant to drought.

Tundra is a moss field in cold climates. As the name suggests, bio mini is dominated by mosses and a little grass that is resistant to cold climates. Tundra is found in North America, Siberania and Northern Europe.

Thus the discussion about the Distribution of Flora and Fauna in the World. Hopefully the material can be understood and provided benefits. That's all from me, thanks.

2 Komentar untuk "Distribution of flora and fauna in the world"